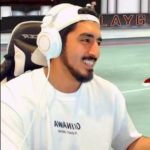 Tyceno has been playing video games since childhood and started playing the NBA 2K franchise when it first released as NBA 2K11 in 2010. He has been maining it ever since.

After high school, he got an office job, which he found to be boring. This motivated him to start creating YouTube content for fun.

He started uploading content to YouTube in August 2016 together with his then-girlfriend. By May 2017, he had managed to accumulate 10,000 subscribers.

His family is supportive of his career choice.