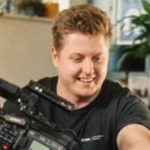 He often goes to visit his mom. He has a miniature Golden Doodle called Kubo.

ThatMumboJumbo started playing Minecraft during its alpha stage in mid-2010. When his channel hit 40,000 subscribers, he decided to quit his paper round to pursue content creation, although he did go on to study Computer Science in college upon completing high school. He completed it in June 2014 and then went full time.

He started uploading content to his YouTube channel for fun in April 2012. He then joined HermitCraft in June 2013, which further helped his channel to grow. He hit 1 million subscribers in April 2016 for its second season. He stopped streaming on Twitch in October 2020, but continues to upload to YouTube.