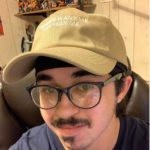 He has a cat called Gumball, as well as a couple of rabbits.

His former gamertag used to have ‘Pokémon’ in it. People shortened it to ‘Poke’ so he decided to shorten it eventually. The ‘ay’ was added later, although he no longer remembers why.

pokay first started playing video games when his brother lent him his Game Boy Advance along with his copy of Pokémon Emerald. He then also moved on to PlayStation 1 games and continued gaming on other systems from there.

He started playing Minecraft in mid-2012 when one of his neighbors introduced it to hm around the time of to 1.3.1 update. He went straight into fulltime content creation upon graduating from high school.

He started uploading Minecraft videos to his old YouTube channel in 2013 as a hobby since he was playing it anyway, but later started uploading CS:GO content to his current channel in November 2015 and then switched to maining Overwatch in during its beta in May 2016. He then moved on to Minecraft in August 2017 after his other YouTube friends invited him to join their server. He still mains it, but also streams variety content occasionally.

pokay only started streaming on Twitch in April 2018 when he finally had access to the necessary internet capacity for it. His channel really started to grow when he met CallMeCarsonLIVE through Twitter and began editing for him and creating SMPLive content with him and the rest of the Fruit Club.

Audio-Technica AT2020
Tweets by @Pokay__