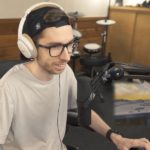 He came up with it when he was eleven years old. At the time, he and his brother would make fun of the franchise because they had a friend named Pete, so he decided to combine the two when he needed to come up with an Xbox name.

PeteZahHutt grew up playing video games, with his favorite being those in the Tony Hawk’s Pro Skater franchise, Spyro amd MediEvil 2. He also played IRL basketball as well as the occasional basketball game. However, he began playing less frequently after he developed asthma.

He first got into Minecraft after watching YouTubers such as ZachScottGames playing it and deciding to try it out himself. He went straight into fulltime content creation upon graduating from high school.

He uploaded his first Minecraft video to YouTube for fun on April 14, 2012 after making it onto the ASF server and becoming friendly with the owners. He began uploading videos on a daily basis after he succeeded in convincing How to Minecraft (H2M) to let him join their server. He started streaming on Twitch in late 2012.

In 2016, he decided to branch out into creating more variety content and uploading them onto a second YouTube channel.

His parents have always been supportive of his content creation and even bought him a new computer specifically so that he would be able to record higher quality content. His mom still watches and ‘likes’ all his new YouTube videos.

He has a brother who is seven years older than him, as well as a Border Collie named Bellamy.

His favorite NFL team is the Green Bay Packers.