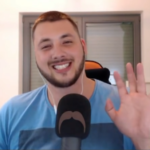 He and his wife have two daughters, as well as a Shih Tzu called 'Butsh'.

‘Ponyhof’ means ‘Pony Farm’ in German. He originally didn’t have any deep reason for choosing his name, but it later came to mean something to him as he gained streaming followers. There is a saying in German, that goes ‘Life isn’t a pony farm,’ which means that ‘life isn’t easy.’ This idea resonates with him, because even though things won’t always go easily for people, they really want their streams to be ‘pony farms.’ Viewers want to visit streams to relax and enjoy themselves with a friendly community.

P4wnyhof started playing card games as a child. He enjoyed playing Pokemon and trading his various cards for other cards. He also played some paper Magic the Gathering (MTG) and really enjoyed the Lord of the Rings card game when he discovered it at fourteen. It was therefore natural for him to start playing Hearthstone (HS) on the PC when it was released in 2014.

He began playing the Beta version while still a student at university. He was originally was pretty bad at it, especially during arena matches. However, he started watching streams to see ho the pros built their decks. He especially found TrumpSC and NL_Kripp's streams to be particularly helpful. He applied what he had learned to his Arena matches and found that he was getting good at it. This inspired him to share what he had learned with others, and so began his streaming channels.

He played League of Legends during its early stages and was pretty good at it. He was playing with Diamondprox and other current pros who were just starting to form teams. However, he put gaming aside for a year, while he focused on his University studies, causing him to miss the launch of the LCS. In early 2017, he started playing a few other games, before switching to PUBG full-time.

In 2014, P4wnyhof started competing in HS tournaments. After ranking high in a few tournaments, he decided to start streaming his Hearthstone gameplays and YouTube videos. His channel soon attracted a following and he even began to take on some casting work. However, after getting married September 2016, he decided to focus on streaming rather than competing in tournaments, as he felt that other work would take away too much time from his wife and streaming. In 2017, he started to stream variety games in addition to HS, as he was getting bored with playing a single game.

P4wnyhof currently has approximately 2,880 monthly subscribers, which averages his likely income at around $8,640 USD, excluding sponsorships and tips.