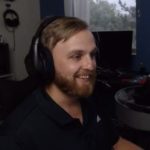 He and his wife have a son. He also has two older brothers and a cat.

n0thing was introduced to video games by his older brother, whom he used to watch play Counter-Strike (CS) when he was small. He then started playing it himself when he was around nine years old. He has played a variety of fps games since then, although he has always mained CS.

He and his brothers were home-schooled, and he spent a lot of his free time playing video games. His mother supported him in his hobby, as he was completing all of his work. She would even allow him to play up to 12 hours a day sometimes.

When she saw how good he was, she allowed him to participate in LAN tournaments when he was only 9 years old. And he would often win. It was always his dream to become a professional eSports player and his mother continued to support him in this dream. He really started frequently participating in LAN tournaments in 2004.

n0thing signed with Evil Geniuses when he was 18 years old for their Counter-Strike 1.6. However, he wasn’t earning enough money from his pro-career, so he attended college on the side. EG dissolved around the time that Counter-Strike: Global Offensive, he moved to different teams before being signed with compLexity Gaming. His team was then acquired by Colud9. During that time, he started creating behind-the-scenes YouTube video content.

In August 2017, he was removed from Colud9’s roster. However, he was still on contract with Cloud9 for another nine months and was stuck focusing on his streaming career rather than his pro-player career. He also starting casting and analyzing gameplays. Those are still the main aspects of his career now, although he does occasionally join teams as a substitute.

His language isn’t so clean.

His schedule is inconsistent sue to his other professional commitments.