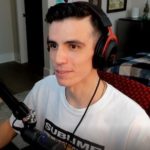 Just9n is close to his mom. His dad passed away a few years ago.

He wanted to use his real name and replaced the 'i' with nine, because it's the ninth letter in the alphabet.

Just9n has shared very little personal information with the public.

He is dating @gonlurntoday. He lives with shroud and often streams with both him and chocoTaco.

Just9n has over 4,000 subscribers, which would net him at least $10,000 USD per month, excluding tips, cheers, sponsorships and tournament winnings.

He doesn’t have a set schedule, but he tries to stream twice daily. When he does stream, it’s usually for between 3 – 8 hours.