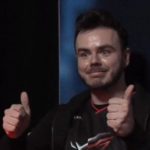 He has a sister and a younger brother.

When he first started playing CS:GO, he called himself ‘JeffW8NC.’ However, he kept getting frustrated in one of his matchmaking games and started making frustrated ‘Houngoungagne’ noises. His other teammates found it funny, so he decided to change his tag.

Houngoungagne’s first video game was Pokémon: Blue on his Game Boy Color. He then started playing online video games when he was thirteen years old and got addicted to a French MMORPG called Dofus. In 2008, he started playing CS: Source online and would play with many other international players which helped him to develop his English skills.

He dropped out of high school when he was 17 and did odd jobs while playing CS:GO in his spare time. He struggled to find proper position, and so chose to attempt to go pro. However, he eventually gave up on that and switched to pursuing content creation into a fulltime profession instead.

He first started uploading CS: Source gaming content onto his French YouTube channel in August 23, 2011 and then transitioned to creating English content on his new channel in July 2014. He only began streaming on Twitch after moving to Germany in late 2016 and finally had the internet capacity to handle streaming.

In July 2018, he cofounded ECL together with FACEIT.