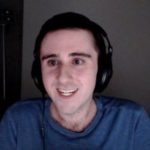 Dratnos started playing paper Magic the Gathering while he was in college.

He started uploading Minecraft guide content to his YouTube channel in October 2011 and started livestreaming on Twitch in March 2012. He qualified for YouTube partnership in May 2012. However, he then took a break from YouTube during 2013 for college.

He decided to return to YouTube in November 2018, with his new main game being World of Warcraft. his main focus was now on producing PvE guides for different elements of the game, with his main class being Rogue. On March 31, 2020, he joined Method‘s stream team. He then moved on to Golden Guardians in August 2021.