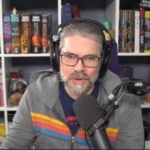 He and his wife have a son, as well as two cats, Skyler and Piani. He also has a younger brother.

DjWHEAT has been playing video games since he was somewhere between 3-5 years old, with one of his favorite games being Combat. He was fortunate in that his family would regularly buy new games for them to play on their Atari. As he got older, he would also spend a lot of his free time in video game arcades. In the mid-80s, his grandparents bought him a Nintendo Entertainment System Deluxe bundle with Duck Hunt and Gyromite in 1986. From then on, he was hooked and would spend the majority of his free time playing video games.

When he was 12, his parents got a PC and he transitioned to PC gaming. Some titles included Wolfenstein, Doom and many others. It was around that time that he discovered Spitfire BBS and got into coding to lean to run scripts. As a teenager, he also got into reading video gaming magazines. However, he was too addicted to video games and would often get into trouble because of him. His parents eventually made him sign up for his high school’s debate team in the hopes that it would help him to let of some of that energy in a healthier way. In the early 90s, he discovered online multi-user dungeons (MUDS) and that became his new passion. Some of his favorites were Rogue, Genocide and Tron. These were entirely text-based and required a lot of imagination and tracking skills from the users.

During college, he started attending LAN events. However, in his second year, he dropped out to pursue a fulltime job at Computer Renaissance. Shortly after that, the Y2K bubble hit and he was offered high-paying job to work in hi-tech support, since he understood the language. He learnt a lot from others at his job, and wound up working there for seven years.

He started casting Quake events online in 2000, which would take up 4-5 hours of his time a night after his fulltime job. He then started looking for an organization to work for as a commentator and managed to hustle a position as the Quake expert at Teams Sports Network. In 2002, he and his friends started a radio show called Epileptic Gaming in 2002. It started out as a weekly 3-hour show and eventually wound up as a daily show with many more collaborators after a year.  After a couple of years, he left them to begin his own station called Inside The Game, radio ITG. In 2004, Brett Hawkins offered to buy IGL from them while keeping everyone on his payroll to be sponsored to cover events. djWHEAT accepted. He and his family then moved to Los Angeles to work for him.

He uploaded his first content to YouTube in July 2006. In November 2006, he and his co-founders of Epileptic Gaming decided to move their show onto an online podcast format. At the end of 2008, the casting scene started dissolving, so he decided to leave Los Angeles to look for something else. So, they returned to their house in Nebraska in the interim. IN February 2009, he first set up his Twitch channel. He then took on a fulltime job at bank backing up their data onto cloud servers in May 2009.

He then got into StarCraft II commentating through an old co-host, Day9TV. After a couple of years, he started working at Twitch on November 1, 2011. He has remained with them ever since and is currently their Head of Twitch Community Productions.