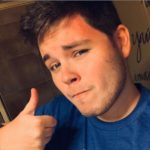 According to his Twitch autobiography: ‘Connor was given to me by my family. I got the name from an iCarly episode where they tell the teacher that he eats pants. Was a pretty funny bit.'

ConnorEatsPants  has been playing video games since he was small, with some of his favorites including Duper Smash Bros. Melee, Wind Waker, Super Mario Galaxy 1, Halo 3, Destiny, Ori and the Blind Forest, Hollow Knight and Borderlands 2.

He first started recording his gameplay for his own entertainment in 2008 starting with his Pokémon Diamond and Pearl on his Nintendo DS, which he would record with a camcorder. He would then upload those videos to YouTube.

He first started streaming casually on Twitch on March 18, 2016 because he wanted to experience live interactions to his content, rather than just the YouTube comments. Some of his first games on Twitch included Pokkén Tournament and Mario Maker. He then began streaming seriously in mid-2017 by committing himself to two hours per night, as he was still in high school at the time.

One of the big factors that helped him to grow was his friendship with YouTuber ScottTheWoz, whom he became friends with while he was still relatively small. When ScottTheWoz’s channel grew, he got to know more influential YouTubers and introduced ConnorEatsPants to them as well. The next was when he met and befriended JSchlatt in late 2018 after one of his community members recommended that he try watching Jschlatt’s content. He enjoyed it, reached out to him via Twitter. Jschlatt was then invited to join a streamer-only Minecraft server owned by CallMeCarsonLive. He then recommended that CallMeCarsonLive extend an invitation to ConnorEatsPants as well. His channel quickly started growing from that point and the rest is history.