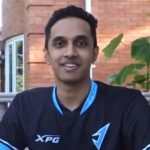 He and his wife have a dog named Luna. He also has a brother.

It’s the number of letters in each word of ‘I Love You Forever.’ He came up with the name when he was around 15 years old and had a girlfriend who didn’t want her friends to know that she was dating someone. She therefore saved his name as ‘1437’ on her phone, and he decided to use it as his gamertag for Battle.net as well.

In his pre-teens, 1437 enjoyed playing Warcraft 3 with his IRL friends. In 2007, while they were playing Warcraft 3, they found out about DotA 1 and decided to try it out. Although he started out playing it casually, he eventually started taking it ore seriously, especially on the competitive side.

His parents weren’t initially thrilled about his choosing to pursue pro-gaming over schooling but have since come to support him.

After a couple of years of playing DotA, he met PowerNet online and would often play together with him. They soon decided to form their own team along with a few of their other friends. They dedicated themselves to scrimming from as soon as he was finished with school until he went to sleep at night. They soon became known in the DotA community, with both of them being recruited onto Ok.Nirvana. This marked the beginning of his professional DotA career and he hasn’t looked back since.

He became a full time professional DotA player as soon as he graduated from high school. In 2015, he transitioned to a coaching position for Team Secret and has since moved between pro and coaching roles for various teams since then. Although he has retired from streaming Dota 2 in favor of Axie Infinity, he still acts as a coach an analyst for Dota 2.

Although he doesn’t have a set schedule, he tends to stream daily for between 4 – 8 hours.