The N3rdfusion team was officially founded in 2015 by a team of streamers who wanted to generate content together with other creators on both Twitch and YouTube. They originally started out by creating a weekly podcast, with four of the five original members moving together to Seattle in order to be able to stream and create IRL content together. They later formed a gaming house for the same reason.

The N3rdfusion team’s  main platform, both as a team and as individual streamers is Twitch. Many of their original members, including DansGaming and GiantWaffle are still part of the team. All of them are among the most popular streamers on Twitch, with most of them boasting at least 450,000 followers each. 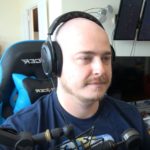