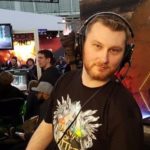 He decided to stream full time from January 2015.

He has ginger hair that he keeps short and maintains a medium-length beard. His eyes are deep blue.

Fairlight_Excalibur is estimated to have ~2,700 subscribers. This would generate around $6,750 - $9,450 per month for him, excluding any income that he receives from tips, advertising and sponsorships.